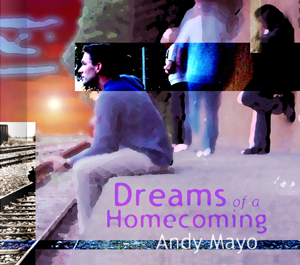 …a long way from the introspective musings or stylised praise and worship of many independent releases. In fact, with contributions from jazz saxman Nick Beston (Take 5 and NBQ) and Stan Mayersky’s winning ways on Hammond and grand it’s jazz which colours many of the tracks here, though Andy wouldn’t claim to be an out-and-out jazzo.

What he is is a thoughtful observer of the carnival of life and whether he’s penning his observations of a shivering child in Belgrade (“Princess In The Park”), the quiet still voice of God (“Today”) or a hint of glory to come (“Dreams of A Homecoming”), Andy’s lyrics are decidedly poetic… his dry, world-weary voice suits the laid back mood of haunting poignancy perfectly.

These songs were written in the shelled remains of the former Yugoslav Republics where London-born Andy made his home for seven years. Yet despite the occasional bleak image his message is continually suffused with transcendent hope.